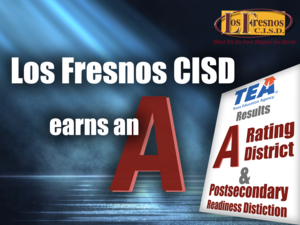 A-Rating and the Post-Secondary Readiness Distinction

The Texas Education Agency announced Los Fresnos CISD has once again earned an “A” accountability rating and the Post-Secondary Readiness Distinction for the 2021-22 school year.

Los Fresnos CISD is one of just a handful of schools in the state of Texas to earn both honors.

The district has earned an “A” rating each year since a change in the system in 2018.  The districts and individual campuses now receive an accountability rating on an A-F scale.  It takes into account three factors, including student achievement, student progress and how well schools are closing learning gaps.

This is the seventh straight year Los Fresnos CISD ranks among a select group of districts that are awarded the Post-Secondary Readiness Distinction.  The designation measures how schools are preparing students with college and career-readiness skills.  Graduation rates, ACT/SAT participation and performance, CTE graduates, and dual-credit course completion rates are taken into account.

“The Texas Education Agency assessment confirms that Los Fresnos CISD is an exemplary district and an academic leader not just in the Rio Grande Valley, but in the state.  Our educators are committed to ensuring that our students excel not just in the classroom, but in college and the work force,” said Valarie Londrie, Chief Academic Officer.