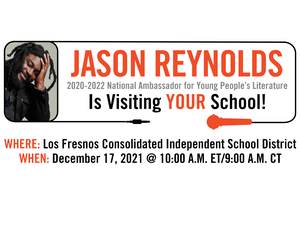 Active participants will be from selected secondary classes

Appointed by the Library of Congress, the Children’s Book Council, and Every Child a Reader as the seventh National Ambassador for Young People’s Literature, Jason Reynolds shares his journey from reluctant reader to award-winning author. Reynolds is an ambassador for young people’s literature and he makes it a point to visit small towns across America to have meaningful discussions with young people. With more than 200 proposals that were received across the United States in April 2021, a total of 8 schools were selected…

Los Fresnos CISD was one of them.

On December 17th, Jason Reynolds will be a virtual guest speaker with Los Fresnos CISD!

There will be 2 Student Ambassadors that help lead the conversations with Jason Reynolds.

“We are thrilled to be selected out of so many applicants!  When I heard that Jason was seeking to connect with rural communities, I knew Los Fresnos had to be one of them. Here in Los Fresnos we believe that “What we do here shapes the world,” and that all begins with literacy. It is not enough that our students simply know HOW to read.  We want them to have a passion for the written word, and to seek out stories for the pleasure of reading. That is why we are so honored to be able to virtually host celebrated author Jason Reynolds,” remarked Cori Spellane Middle School RLA Strategist. Jason Reynolds is the author of thirteen books for young people including Look Both Ways: A Tale Told in Ten Blocks, a National Book Award finalist, which was named a Best Book of 2019 by NPR, The New York Times, The Washington Post, and Time.  Each participating student will receive a copy of a book by Jason Reynolds.