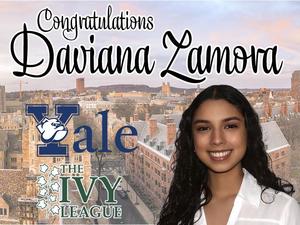 Los Fresnos High School Top 10 student becomes seventh LFHS student in last four years to join the Ivy League.
Daviana Zamora, a Top 10 student in the Los Fresnos High School Class of 2021, has been accepted to and plans to attend Yale University.
Daviana, daughter of Noelia Rodriguez and Felipe Zamora, chose Yale because it would be the biggest challenge. "The academic rigor and distance from home is definitely an adjustment I will have to get used to," she said. "However, every student and administrator I met seemed to genuinely enjoy being part of the Yale community. The financial aid was hard to pass up."
Daviana was also accepted to Ohio State University, The University of Texas, Texas A&M University and The University of Texas Rio Grande Valley.
She plans to major in political science at Yale. "I hope to better educate myself on important topics in our country and world as a whole so that I can help expose students and adults in communities like ours to important political discussions," Daviana said. "I think a greater exposure to these topics will help people understand the world around them as well as their own rights and privileges."
At LFHS, Daviana was an AP Scholar, National Hispanic Scholar, captain of the UIL Extemporaneous Speech Team, National Honor Society Treasurer and Student Council member.
"The UIL extemporaneous speaking played a large role in my life these past four years," Daviana said. "Without the experience I gained through this team, I would not have had the confidence to even apply to a school like Yale."
She credits four teachers for helping her along her journey – Avery Danielson, Martin Fell, Krystal Medrano and Charmaine Thomae. "They were amazing throughout high school and I thank them for the wonderful end to my time as captain."
Daviana becomes the seventh student from Los Fresnos High School in the last four years to be accepted and attend an Ivy League university. Others were:
Published April 23, 2021 Print