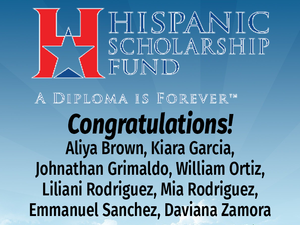 Invitation for the honor was extended to students that scored in the top 2.5% among Hispanic and Latino PSAT/NMSQT test-takers in the area. Students who submitted applications are then evaluated and recognized.

Yearly, the program honors almost 5,000 of the nearly 250,000 Hispanic/Latino juniors who take the Preliminary SAT/National Merit Scholarship Qualifying Test. Although the program is not a scholarship, it is an academic honor that can be included in college applications. Colleges use the program to identify academically exceptional Hispanic/Latino students.

Mia Rodriguez and Sanchez were also named to the National Rural and Small Town Recognition Program.

The College Board defines each program as:

Award letters and certificates for each College Board National Recognition Program Scholar have been distributed to students.