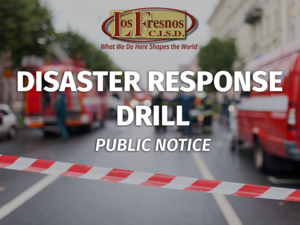 The Los Fresnos Consolidated Independent School District notifies the public of a Disaster Response drill that will be coordinated and conducted by the American Red Cross at the Los Fresnos United Dome.  The American Red Cross will conduct the “Disaster Response Scenario” on Saturday, November 5th between the hours of 8:00 a.m. and 5:00 p.m.  Local and state law enforcement, including Los Fresnos CISD Police, as well as other responsive agencies will join the drill in for training purposes.  As such, the public will see an increase in activity at the LFU Dome on Saturday and should not be alarmed.