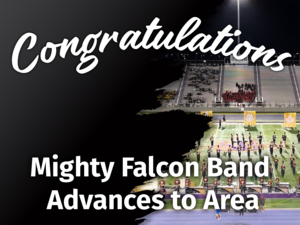 The Los Fresnos CISD Mighty Falcon band is advancing to the Area competition following a strong showing at the UIL Region 28 “Pigskin” Marching Band Contest. The 160-person band earned 1st Division designations from each judge for the program “(re)NEW”. As a result, the band placed second in the 6A class and second overall. The Color Guard came in third place in their in their classification.

Mighty Falcon band is known for their annual success and superb record. This year, the band made finals in every competition which begins the first week of October and runs through the beginning of November. The “Pigskin” Regional competition took place on October 15th at Bobby Morrow Stadium in San Benito. Next stop is PSJA Stadium on October 29th, where they will perform in the Area G Marching Competition. The preliminary performance will be at 12 noon.