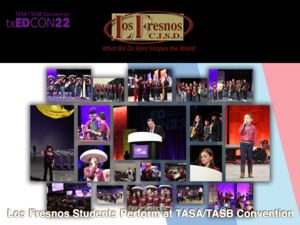 When seven-year-old Melody Castillo walked onto the stage at the Henry B. Gonzalez Convention Center, the audience of Texas education leaders and trustees were instantly impressed.

The Los Fresnos Elementary second grader’s dynamic rendition of the National Anthem set the tone for the collective energetic performance to come.

Eighty-five Los Fresnos students performed a twenty minute musical set at the TASA/TASB TxED Convention in San Antonio on Friday, September 23.  The first general session of the weekend-long convention was moderated by Los Fresnos CISD Superintendent Dr. Gonzalo Salazar, who is serving this year, as president of the Texas Association of School Administrators.  The students joined Los Fresnos CISD board of trustees and administrators who made the trip to support Dr. Salazar.

“When I joined TASA sixteen-years ago I sat in the convention center, tapped the person sitting in front of me on the shoulder and asked how students were selected to perform on stage at the convention.  The answer was this was the courtesy afforded the president of TASA.  That was the start of a dream to have our students showcased on one of the largest stages in education in the state of Texas,” said Salazar.

The opportunity for Los Fresnos students to represent the district came when Dr. Salazar was elected in June by a  group of his peers to serve as president of TASA for the 2022-2023 school year.  In his role, Dr. Salazar was tasked with assisting in moderating the 3-day convention,  which brought together Texas leaders in public education for professional learning and networking while celebrating the accomplishments of their districts.

In July,  students from the Los Fresnos CISD’s fourteen campuses were chosen for the diverse showcase which featured the vocal and musical talent of various groups.  including the Los Fresnos High School Mariachi Nuevo Halcon, Jazz Band, and Color Guard.  The talent of the Conjunto bands from LFHS/LFU and Los Fresnos Elementary, in addition to members of choirs from all elementary and middle schools were appreciated by those in attendance.  Academic and STEM achievement in the form of robotics was also featured, by LFU freshmen Judy Mire and Matthew Gomez, who narrated the program.

The songs, which included a medley of tejano, mariachi, jazz, and classic hits that energized the room and brought the crowd to their feet.  “We chose the songs because we wanted people to hear the music and say they could relate,” said Santiago Castillo, Los Fresnos Elementary Conjunto sponsor.

The amazing performance opened the first of the txED Convention 2022 general assembly sessions, followed up by a message delivered by Dr. Salazar.  Salazar’s message spoke of the many great things happening in public schools in Los Fresnos, throughout Region One and across Texas:

“Children in our public schools participate in a jazz band and appreciate/perform the music of Miles Davis or John Coltrane and/or Canciones Rancheras of Lola Beltran and Alejandro Fernandez, to perform Narciso Martinez’s Muchacha Bonita or Ramon Ayala’s conjunto ballads.

Our teachers use the arts as a vehicle to validate culture and heritage…to help children arrive at a better understanding of self…where they came from and where they are going.  The fiber of the fabric of democracy is being woven in our classrooms each day. “

“When the students took the stage, I watched from backstage with pride and a tear in my eye.  Their hard work paid off and they nailed it,” said Castillo.

“Each Los Fresnos student holds a unique talent that contributes to the collective landscape of this amazing showcase. We are proud of their eagerness to merge their skills and commit their time to make their performance a success.  These are the true hallmarks of future Los Fresnos leaders,” said Dr. Salazar. 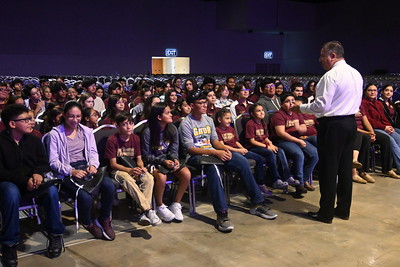