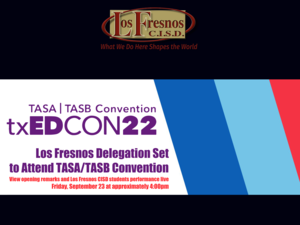 -The TASA/TASB Convention txED CON 2022 will be held this weekend, September 23-25

-Superintendent Dr. Gonzalo Salazar serves in the role of President for the 2022-2023 year.

The “TASA/TASB Convention txED CON 2022” brings together Texas leaders in public education for professional learning and networking while celebrating the accomplishments of their districts.  Dr. Salazar, who assumed the role of TASA president in June,  will assist in moderating the 3-day convention at which Los Fresnos students have been invited to perform to represent the district.

The group of eighty-five students representing each of the district’s fourteen campuses will take part in the twenty minute performance.  The diverse showcase features the vocal and musical talent of various groups, including the Los Fresnos High School Mariachi Nuevo Halcon, Jazz Band, and Color Guard.  The Conjunto bands from LFHS/LFU and Los Fresnos Elementary, in addition to members of choirs from all elementary and middle schools will take part.  Academic and STEM achievement in the form of robotics is also part of the program, which will be narrated by students Judy Mire and Matthew Gomez.

“Each Los Fresnos student holds a unique talent that contributes to the collective landscape of this amazing showcase. We are proud of their eagerness to merge their skills and commit their time to make their performance a success.  The true hallmarks of future Los Fresnos leaders,” said Dr. Salazar.

Dr. Salazar assumed the role of President for the 2022-2023 school year after being voted into the role by peers from across the state.  Dr. Salazar has been a proud member of TASA for 16 years, serving in various leadership roles.  He has proudly served the Los Fresnos Consolidated Independent School District as superintendent since 2006.  He strongly believes in the mission of TASA, and is grateful for the diverse opportunities the organization affords district leaders, staff, and students. “Leadership is important and matters at all levels of the school system. TASA is an organization that exists to develop leaders in public education through professional learning and growth opportunities,” said Dr. Salazar.

A live link to Dr. Gonzalo Salazar’s opening remarks and the Los Fresnos student performance will be available on Friday, September 23, 2022 at approximately 4:00 pm.