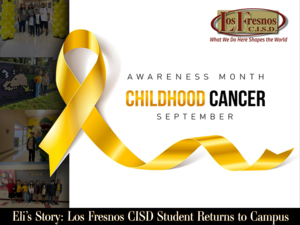 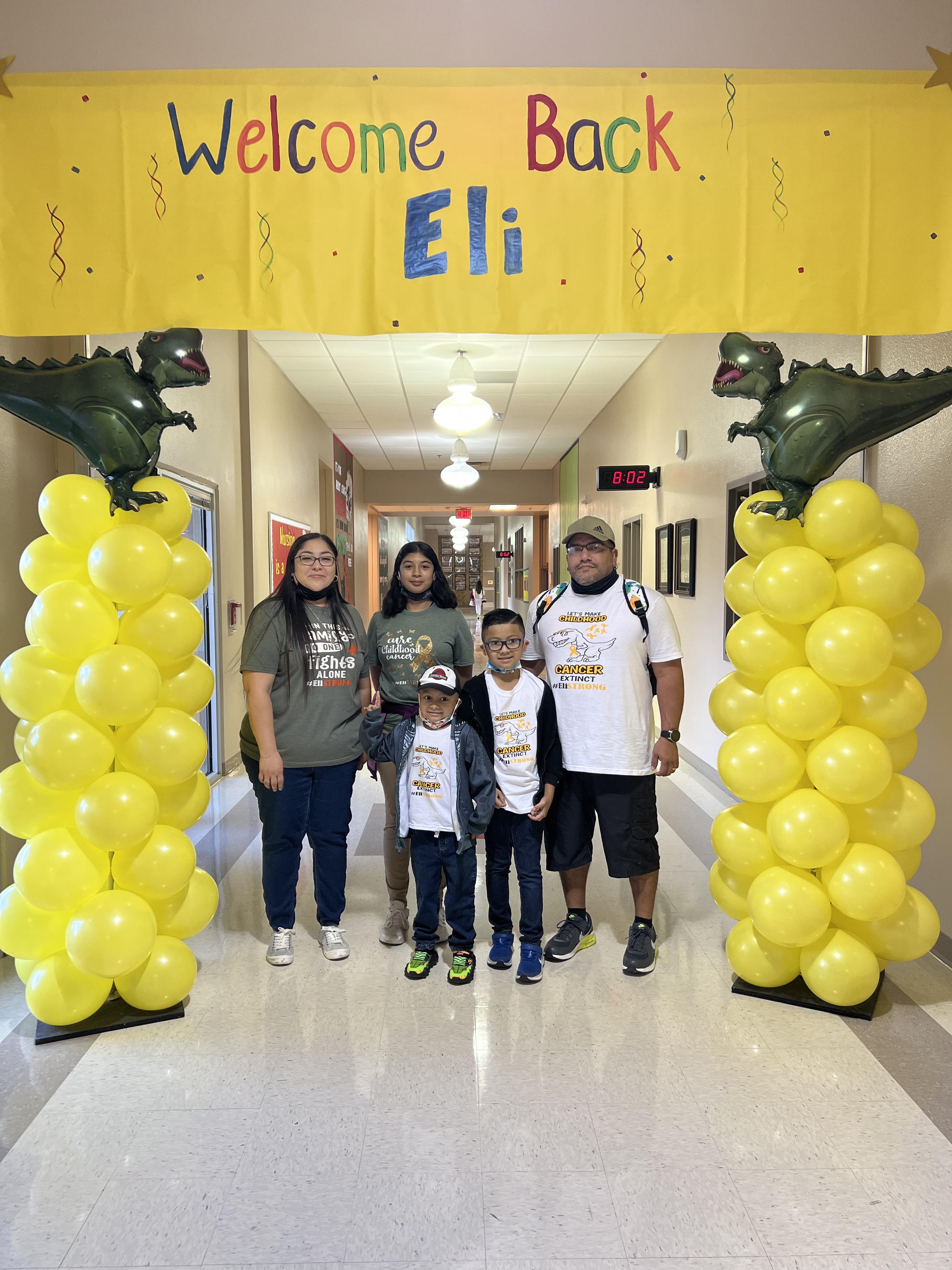 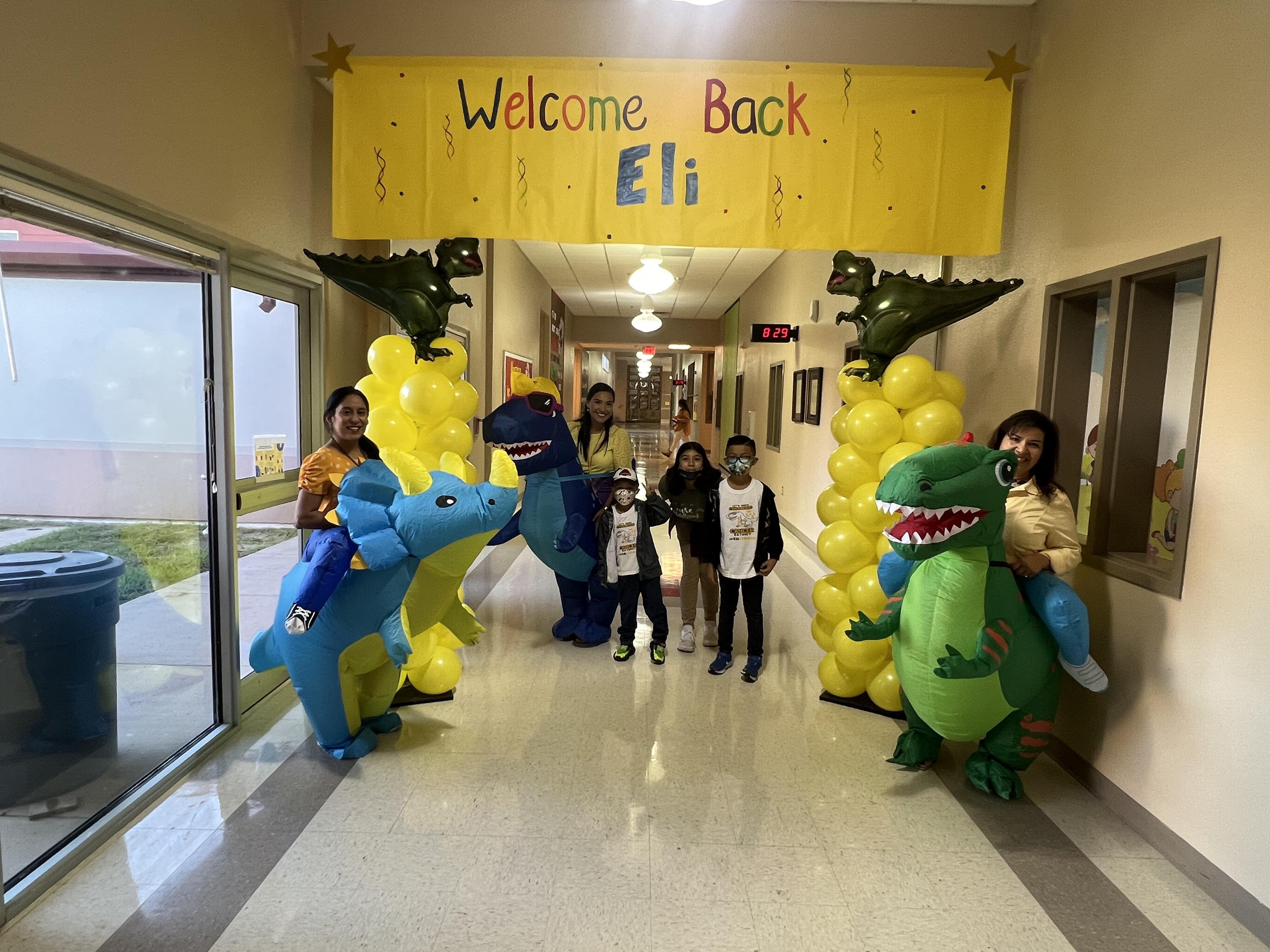 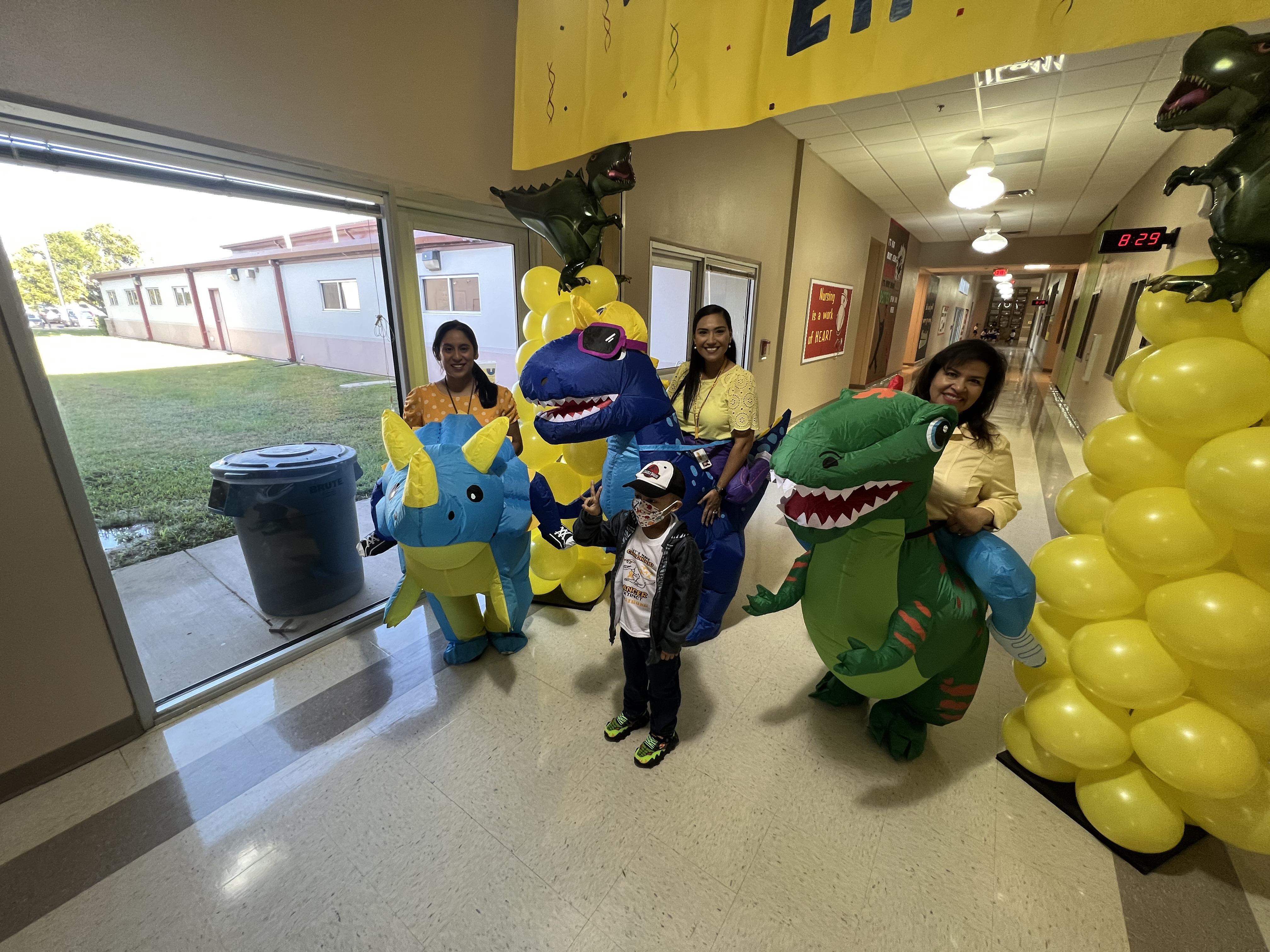 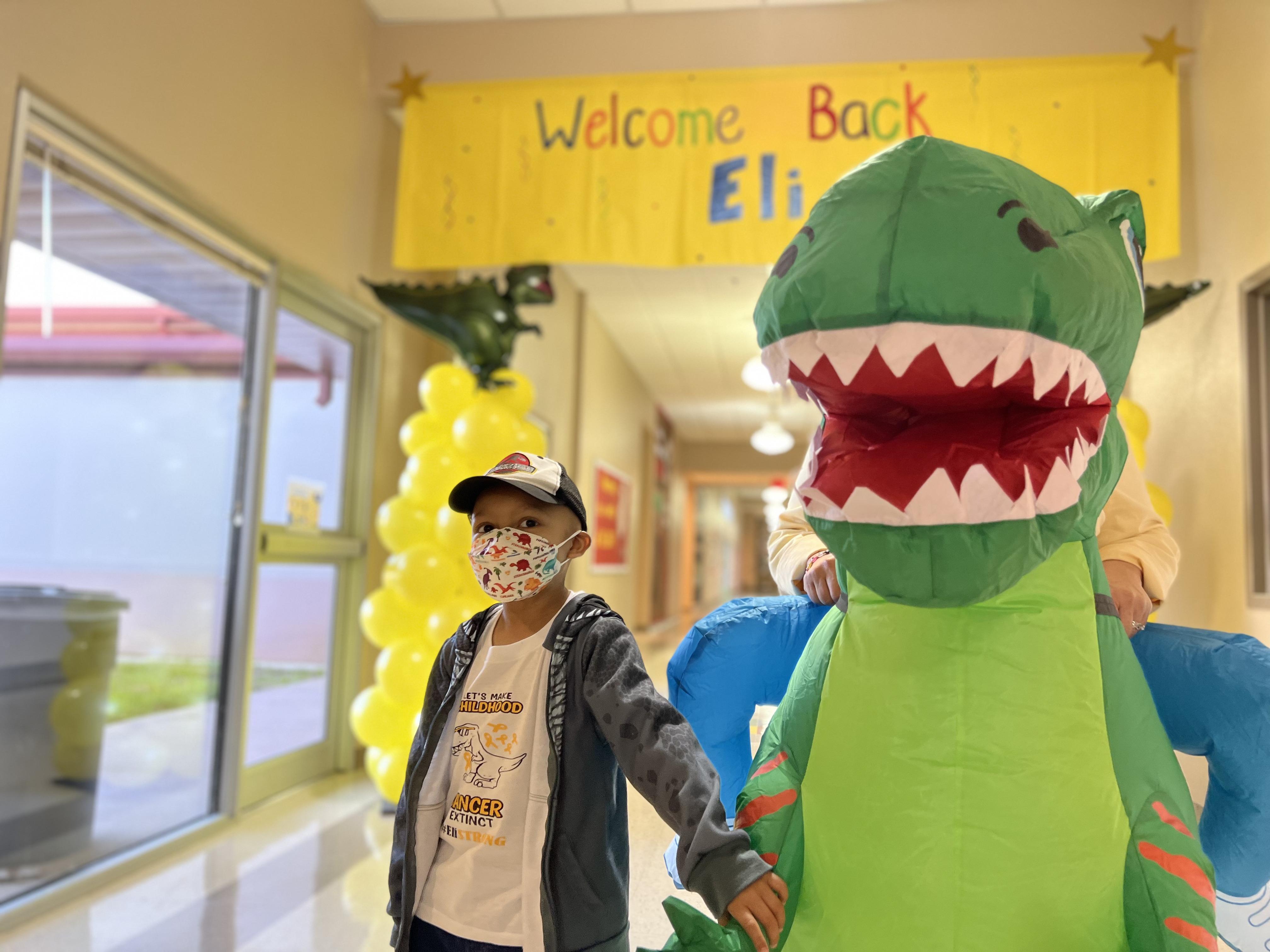 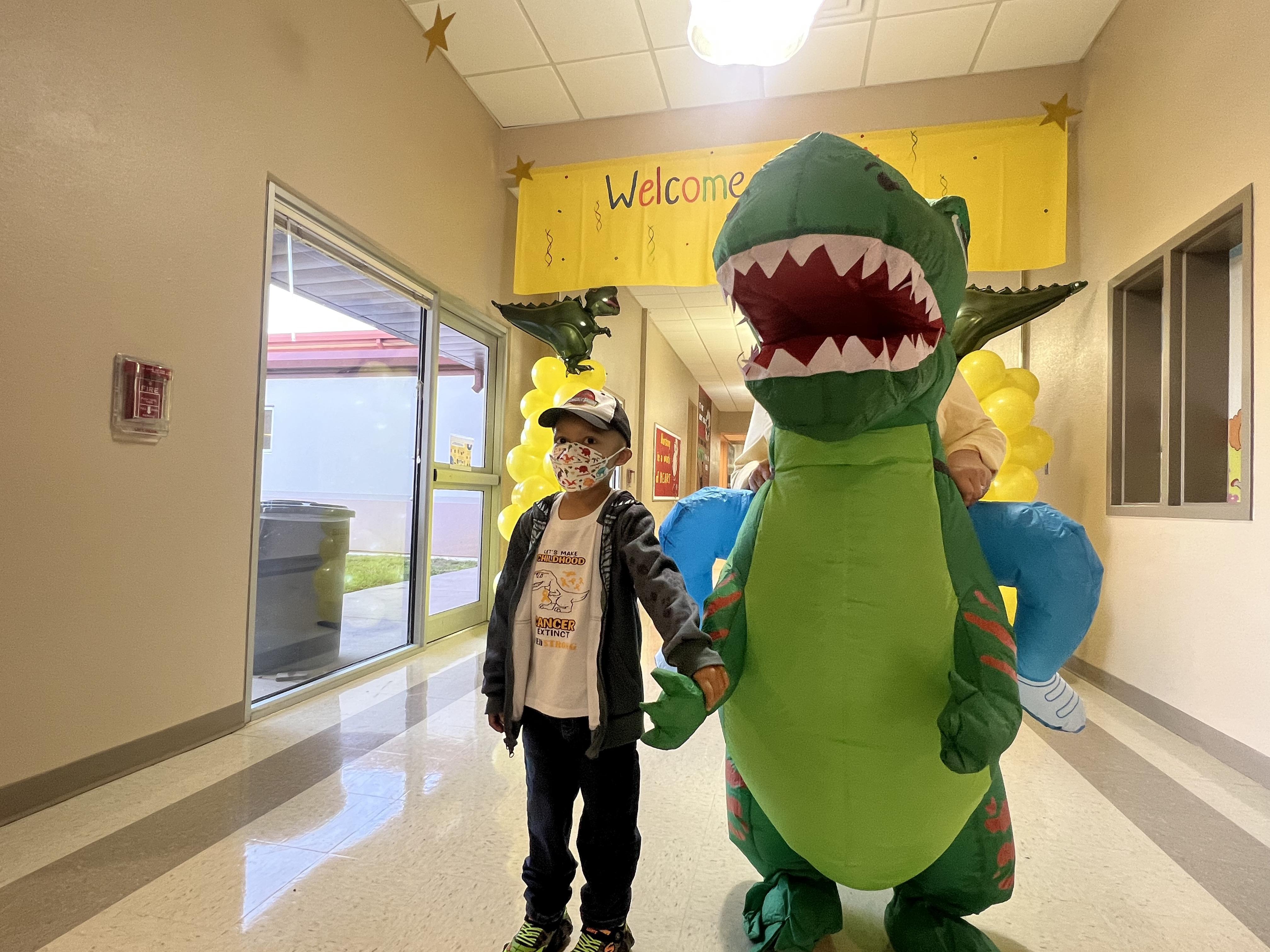 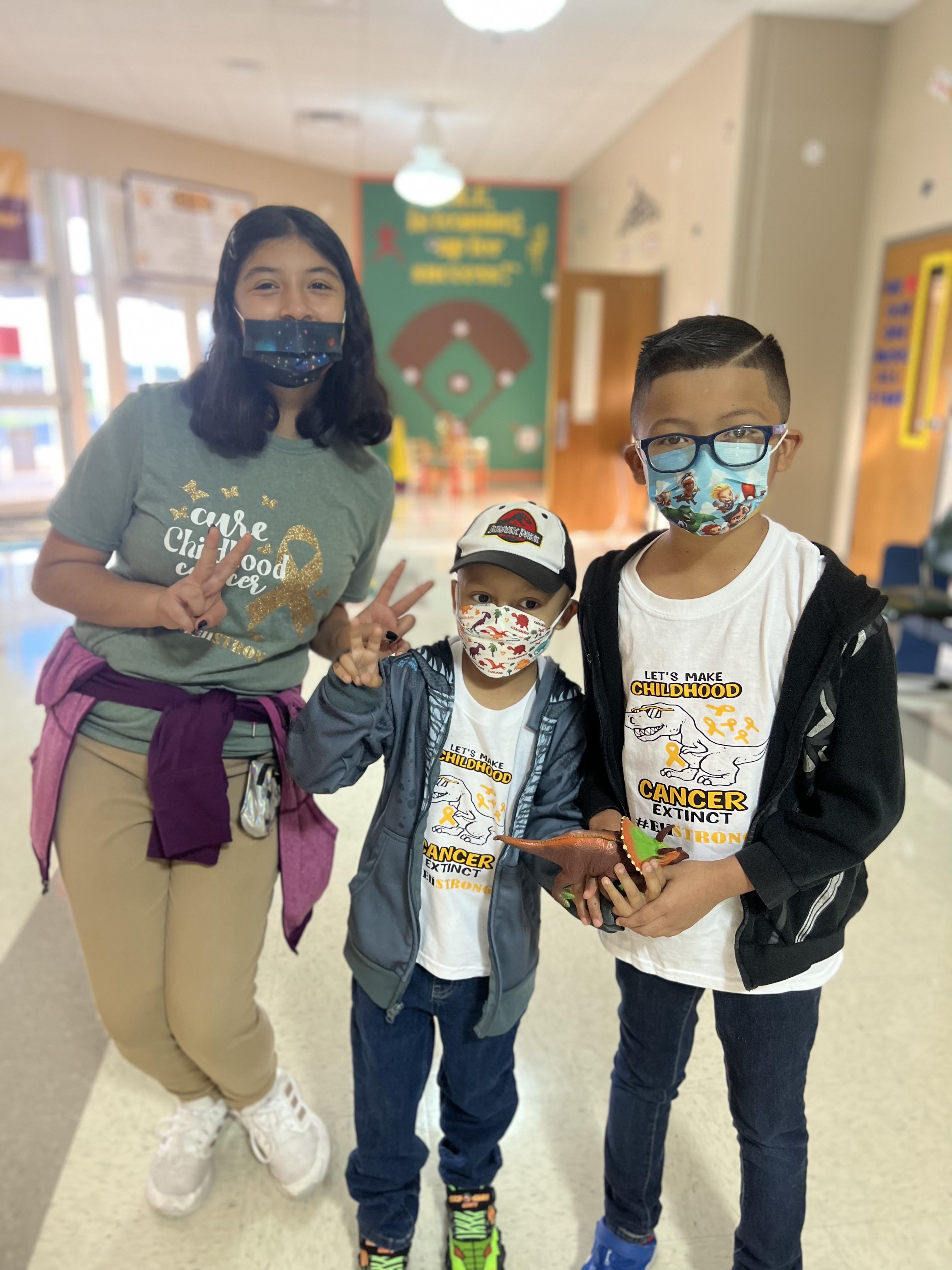 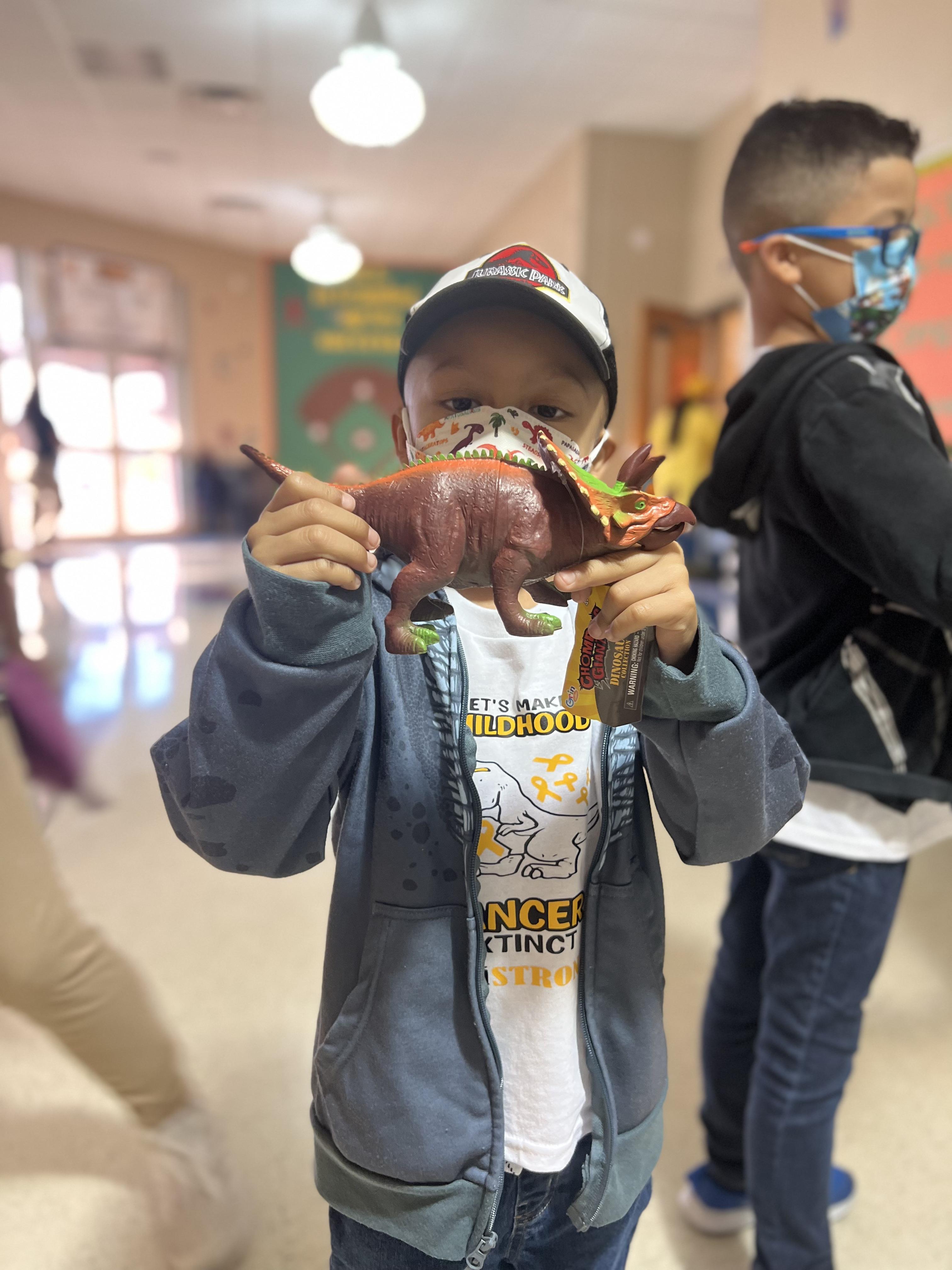 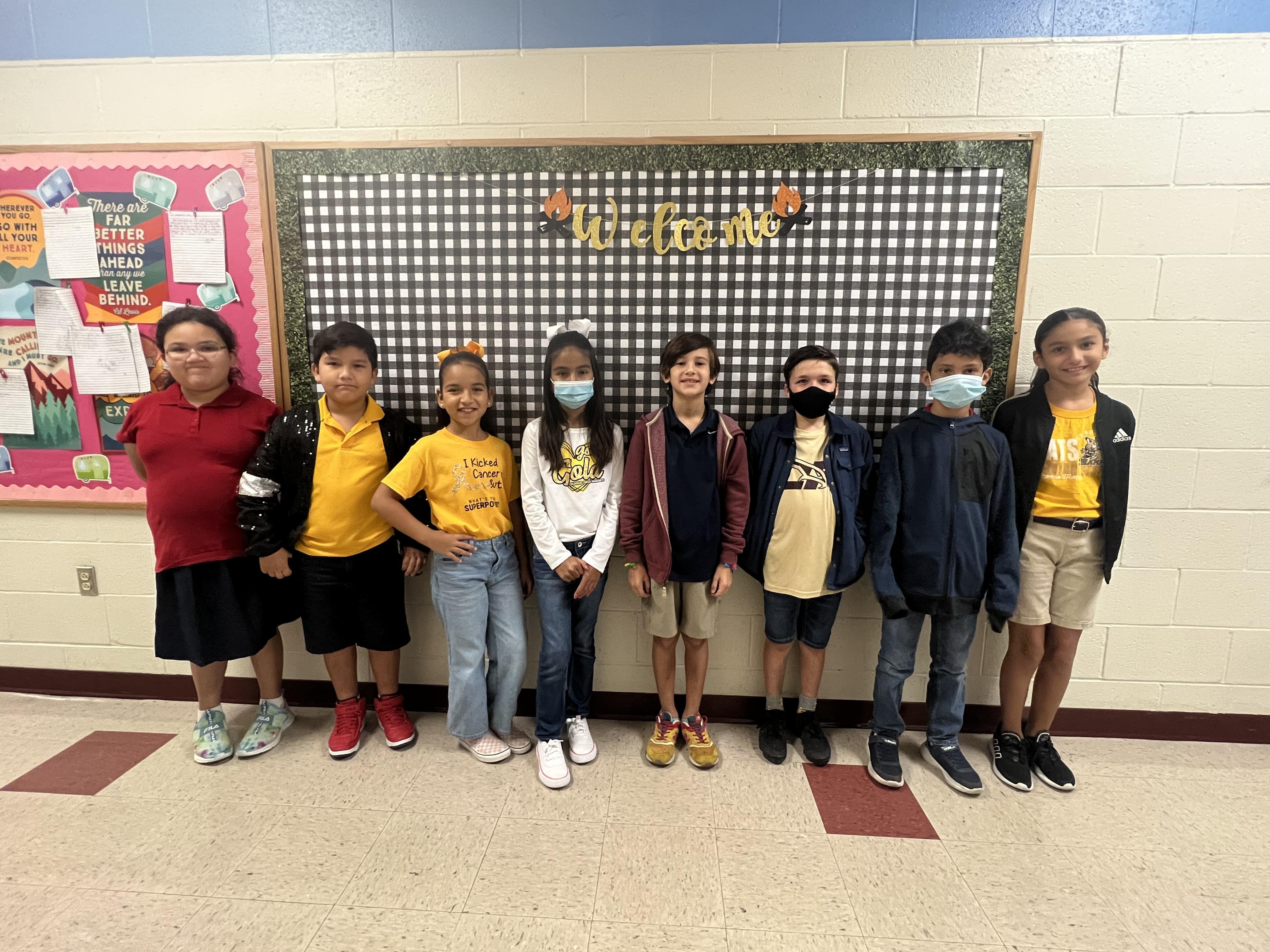 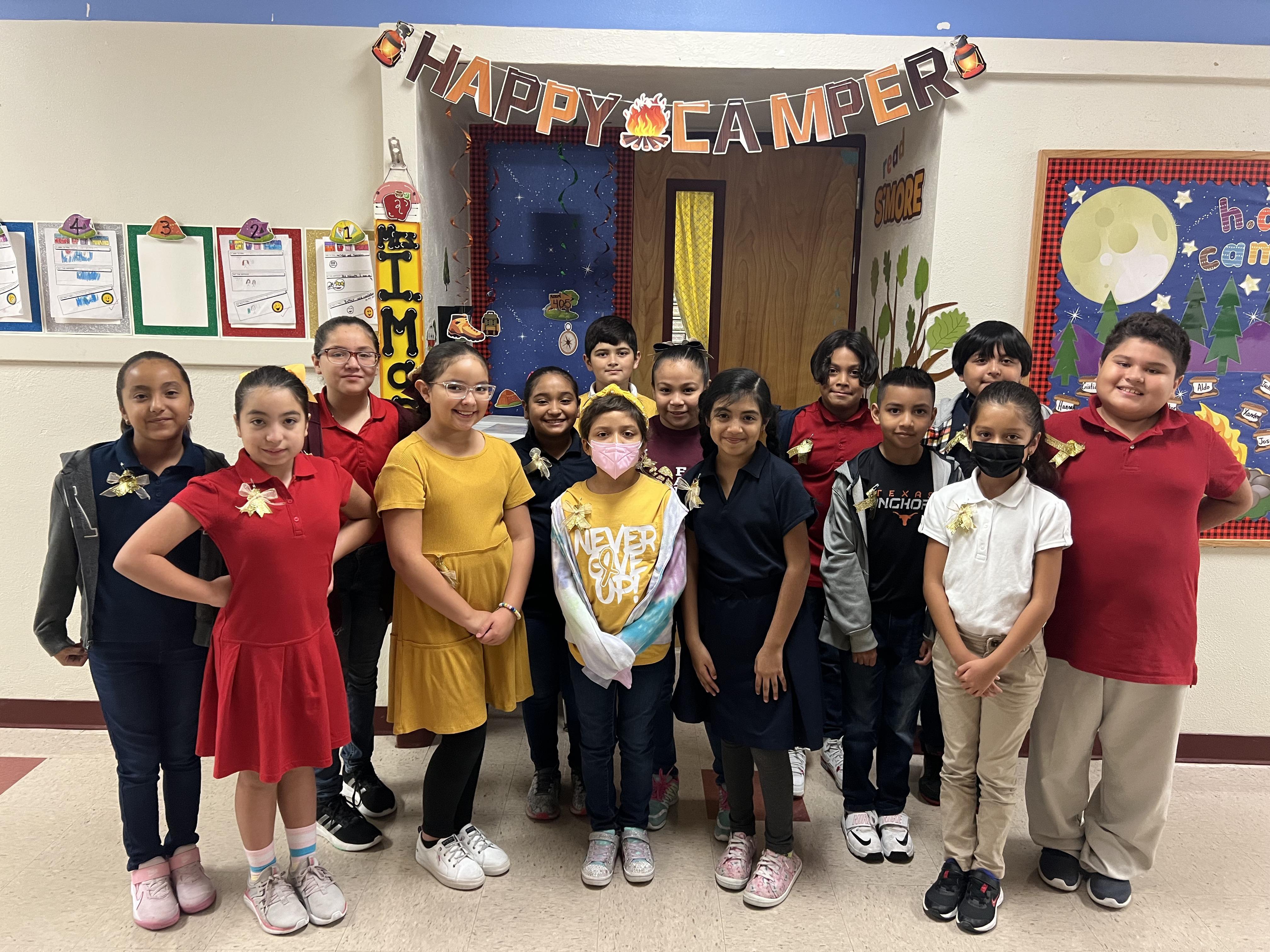 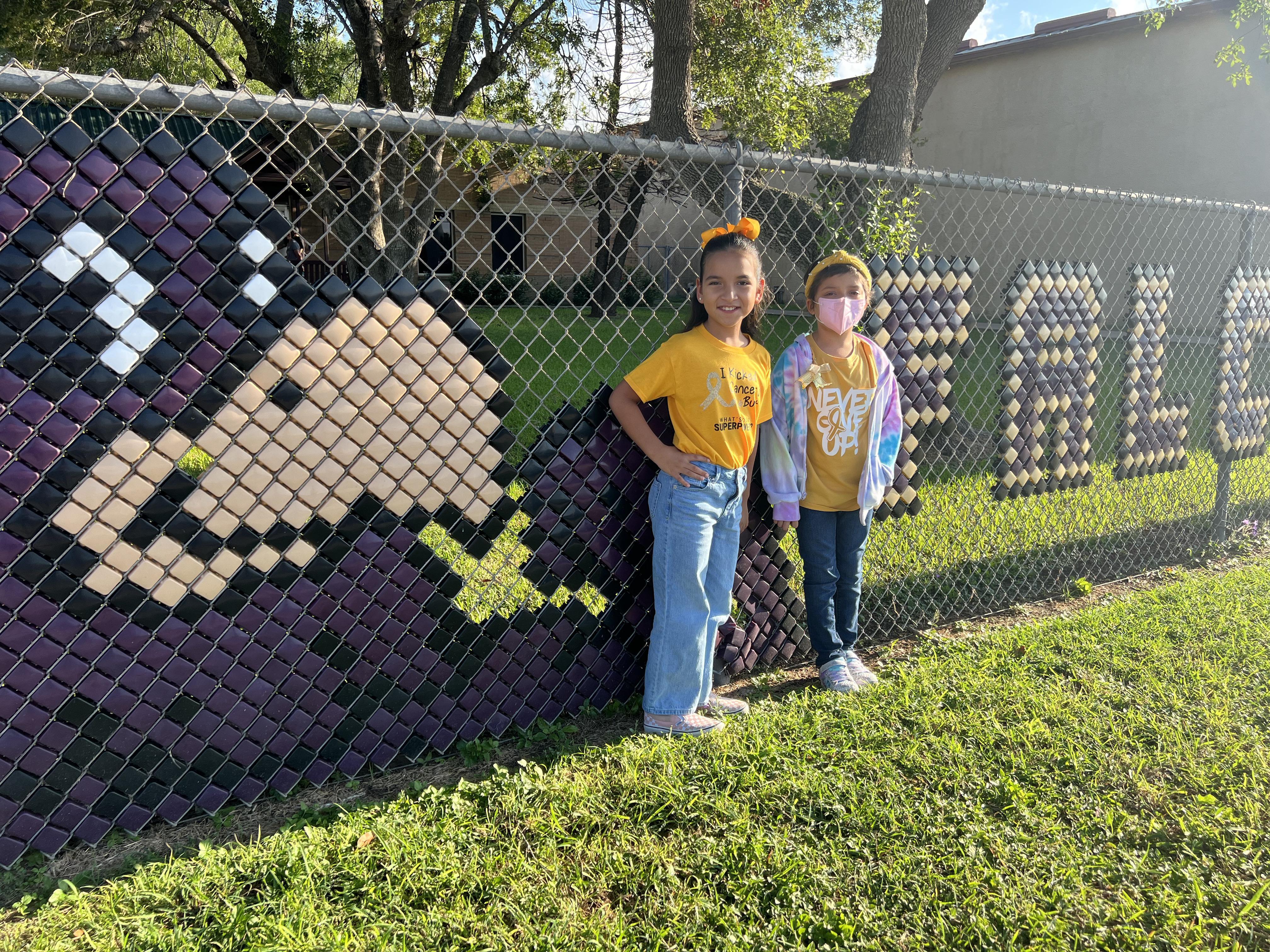 When Eli Garcia walked through the doors of Dora Romero Elementary this week, he was roaring with excitement!  The now Kindergartener returned to school with a dino-mite celebration with his family, classmates, and staff at DRE.

It comes nearly one year after he was diagnosed with Leukemia. Last year, the then Pre-Kindergarten student’s parents and teacher grew concerned about bruising and pink dots that developed on his skin.   “Mrs. Cervantes expressed the same concerns we had for Eli when the bruising started to develop more frequently,” said Elizabeth Garcia, Eli’s mother.  “We took him in for a physical and it was there that his doctor prompted us to get lab work done,” said Eli’s father, Adrian Garcia.

Eli was diagnosed with Leukemia within days, and within hours of the diagnosis, the family was  on their way to Driscoll Children’s Hospital in Corpus Christi.  “Our whole world was just turned upside down,” said Adrian Garcia.  Eli’s family was separated for ten months as he received treatment.

His parents acknowledge the heavy toll of uncertainty and separation were difficult for the family.  But they found support and strength in the relationships they forged with local families whose children were also at Driscoll at the same time affected by the disease. “We were surprised to see other families from Los Fresnos and Brownsville who were also receiving treatment.  Our family felt supported within our community,” said Elizabeth Garcia.

Childhood Leukemia, or cancer of the blood cells and bone marrow, is the most common cancer that affects children.   Statistics show 3,500 to 4,000 children will be diagnosed yearly with a 5-year survival rate of 90%.  Doctors say it is important to keep up with wellness exams, and to always be vigilant of changes that may seem out of the ordinary in your child.

October marks Childhood Cancer Awareness month, and like Eli’s celebration, the color gold shines bright on all Los Fresnos campuses. Administrators, staff and students are wearing the color on Wednesdays not just to advocate for awareness, but to support their peers who are also survivors.

At Los Fresnos Elementary, fourth graders Bella Arce and Mia Soto are thriving after similar battles with Leukemia.  The girls are learning and growing with the encouragement of their teachers and classmates.

Eli is currently in now in remission and will remain under treatment for two more years.  His principal says his perseverance is a point of pride for their campus.

“Eli is an incredible little boy who, despite facing so may challenges, has shown us what strength and perseverance look like.  Eli has a bright future ahead!,” said Karina Lucio, Principal of Dora Romero Elementary.