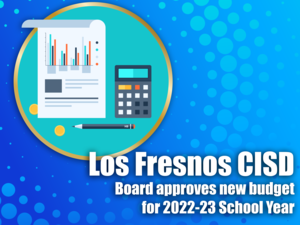 - Salary increases of four-percent from midpoint for eligible employees

The Los Fresnos CISD Board of Trustees adopted a budget for the 2022-23 school year, lowering the tax rate by 3.8 cents and approving salary increases.

The $108.1 million operating budget was approved at a Special Called Board Meeting on Monday, August 22, 2022. The budget is a two-point-two percent increase from adopted budget in fiscal year 2021-22 budget.

Included in the budget package is salary increases for all eligible employees who worked at least 90 days in the 2021-2022 school year. The pay raise of four percent from the mid-point is determined from the 2021-22 professional hiring schedule or their respective pay scales, and will go into effect in September 2022.

“We want to offer competitive salaries to our employees to help meet their needs and reward their dedication and commitment to student and academic excellence,” Superintendent Gonzalo Salazar said.

Additional items that are being supported by the district’s 2022-23 school year budget include the following:

· New technology devices to maintain one to one instruction

· A plan to replace classroom and library furniture

The budget will additionally serve to support the student population which is projected to be approximately 10,300 across the district’s fourteen campuses.

“The Board of Trustees has worked with administration to ensure we uphold our fiduciary responsibility to the community while maintaining a standard of excellence that leads the state. We are grateful to the Board for their unending support and guidance,” concluded Dr. Salazar