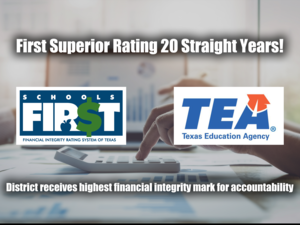 The Los Fresnos CISD scored a perfect score of 100 on the TEA’S Financial Integrity Rating System of Texas (FIRST) report. This is the 20th straight year the district scores an “A” for Superior Achievement.

Fifteen financial indicators are taken into account by the TEA when assigning one of four financial accountability scores. They include administrative cost expenditures; the accuracy of a district or charter’s financial information submitted to TEA; and any financial vulnerabilities or material weaknesses in internal controls as determined by an external auditor.