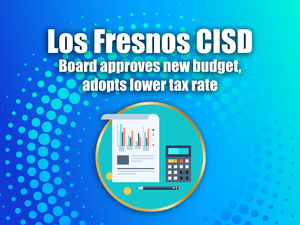 At the August 30, 2021 Special Called Board Meeting, the Los Fresnos CISD Board of Trustees unanimously approved a budget and set a tax rate for the 2021-2022 school year.  The tax rate adopted is a three cent decrease from the previous year.

Trustees approved a budget that sets the district’s tax rate of $1.16 per $100 valuation, which is the three cents lower than the $1.19 rate that has been in place since 2010.

“The Board of Trustees, in their oversight capacity, continue to stress the importance of exercising the fiduciary responsibility we have to the residents of our community.  Throughout the years, the Board has worked with administration to save where we can so we can spend where we must and we have strived to operate the District efficiently.  It is a good day when we can pass a $63 million school construction bond and turn around and adopt a balanced budget and set a tax rate that is three cents lower than the tax rate set the previous year,” said Superintendent Gonzalo Salazar.

The adoption of the budget demonstrated the District’s commitment to its fiscal responsibility and support for initiatives that will ensure that Los Fresnos CISD remains one of the top academic school districts in the state.