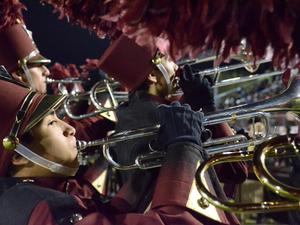 2021 Falcon roster to be split into Maroon and Gold teams.
It will be football time in June as the Falcon football team will split in two in the Maroon and Gold game at 6:30 p.m. Monday, June 7, at Leo Aguilar Memorial Stadium.
The game was originally scheduled for Friday, June 4, but moved to Monday because of inclement weather expected and the Falcon baseball team playing its regional final game Friday in Corpus Christi.
It's the first spring game for new head football coach and Athletics Director David Cantu, who was hired in January to take over the program.
UIL regulations allow Class 5A or 6A schools to participate in spring training if they choose, thus bypassing an extra week of workouts in August.
The Falcon teams will be split evenly into Maroon and Gold teams.
The LFHS Band will also perform at halftime of the game, and play from the north end zone.
Published May 31, 2021 Print