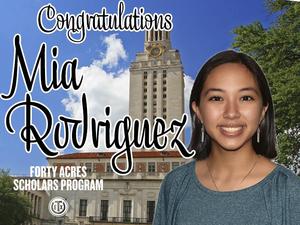 LFHS salutatorian will have all college expenses paid at The University of Texas at Austin.

Los Fresnos High School Class of 2021 salutatorian Mia Rodriguez has been named a recipient of the Forty Acres Scholars Program Class of 2025, ensuring her a full four years of tuition, fees and stipends to The University of Texas at Austin.

More than 4,700 students applied for the elite scholarship program, which inspires and nurtures visionary leaders and helps them use their talents to benefit society. Sixty-five students including Mia were named finalists in March and were part of a virtual weekend with UT staff and faculty.

On Wednesday, UT Austin announced Mia as one of the 17 recipients.

"I remember receiving the email while out for breakfast with a friend and the feelings of shock and excitement as I explained to her why I was so happy," Mia said. "Later, when I told my parents, I felt so incredibly grateful and proud. It felt like all the hard work I put into high school was worth it."

Forty Acres Scholars will receive full funding for their tuition, a living stipend, a book stipend, and opportunities for enrichment activities including a community component, a global experience, and professional experiences. The program is sponsored by the Texas Exes.

As the only program of its kind administered by an alumni association, the Forty Acres Scholars Program helps Scholars develop a unique connection with their alma mater — and with each other. Over their four years on campus, Scholar cohorts form a tight bond with each other, and serve as a powerful network and resource to each other during their time on campus and beyond.

Mia was the founder of the Peer Helpers Club and the Literary Arts Club. She has studied classical piano, served on her church worship team, and is a volunteer piano teacher for young girls. She was also a National AP Scholar. She is the daughter of Terry and Fernando Rodriguez, Jr.

Mia was accepted to the prestigious Yale University, an Ivy League school, but turned it down to accept the offer at Texas, which will cover all of her college expenses.

"While the proximity to family was not necessarily a big factor, of course I am very happy that my family will be able to visit me often," she said. "I look forward to sharing the football season and the music and cultural events of Austin with them."

Mia was also accepted into the University of Virginia and to receive the Echols Scholar Award, and is waitlisted at Columbia, Harvard and Rice universities. Her older brother Nicolas attends Stanford University as a Political Science major and older sister Eliana attends Texas A&M University as a Business Honors major.

Mia will join the Plan II, Bachelor of Arts in Music program with an emphasis in Music.

"I honestly never expected to study music in college," she said. "However, when I learned about the Plan II program at UT, which is an interdisciplinary arts and science honors major within the Liberal Arts college that encourages double majors, I realized this was a unique opportunity for me. Plan II allows me to receive both a humanities education and also pursue my love for piano. I am very excited about my next four years of school."

"I always felt that their classrooms were open, and my questions were encouraged. Their support, both academically and in extracurricular activities, helped me gain confidence in my own abilities as a student and as a leader."

Mia's scholarship was funded by donors of the Texas Exes.