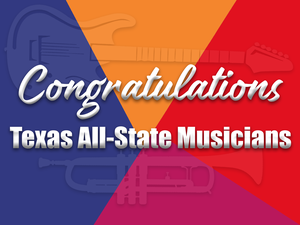 This honor reflects these students’ extraordinary commitment and work toward musical excellence.

The four were chosen for this impressive honor through a competitive process that began last fall and included district, region, and area levels. Garza, Vega and Zúñiga play trumpet with LFHS Band, and Ramirez plays bass guitar with the LFHS Jazz Band 1. It's the second all-state honor for Zúñiga.

Despite the innumerable challenges encountered throughout this school year, 2021 all-staters remained committed to their personal musical development. They demonstrated the very perseverance and dedication that ongoing participation in a music program fosters.

TMEA sponsors the Texas All-State audition process to promote students’ dedication to their musical knowledge and skill and to encourage educators to support their students in this development. All-State is the highest honor a Texas music student can receive.

Because of the impacts of the pandemic, TMEA will not host a 2021 performance event.