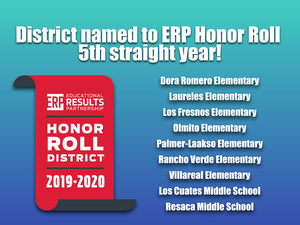 Nine of the 14 Los Fresnos CISD schools – 64 percent – were named Honor Roll Schools by the Educational Results Partnership (ERP) for 2019-20.

Los Fresnos CISD was one of only seven school districts in Texas named to as an Honor Roll District. The District was one of only three to have received the honor all five years since the inception of the award in Texas in 2015-16.

The ERP Honor Roll recognizes public elementary, middle and high schools that demonstrate high levels of student academic achievement, improvement in achievement over time, and reduction in achievement gaps throughout the United States. It uses student achievement outcomes as the criteria and is a growing resource for all schools.

Two of the three district middle schools – Los Cuates and Resaca – were also named to the Honor Roll.

The selection is the result of an extensive analysis of student data for every public school and school district in Texas.

The Partnership measured success by identifying specific learning objectives aligned to college and career readiness. Some of those objectives include: