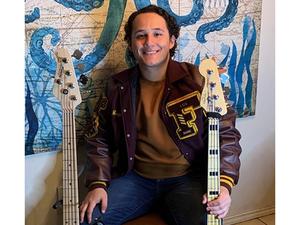 As the first chair, Ramirez is the top-ranked bass guitarist in Texas and the first All-State Jazz student in Los Fresnos High School history.

The audition process begins in May of each year when five complex pieces of music in a variety of styles are distributed across the state.  Students practice through the summer and into the fall in preparation for the TMEA All-Region Jazz Band audition, which is the first round of the competition.

A student must place first on bass guitar in order to advance to the next round. Benjamin has won in Region 28 each of the last two years.  Next, recordings are made by all 1st chair students across the state in order to be ranked against each other.  Benjamin won placement into the TMEA All-State Jazz Ensemble 1 during this final statewide phase of the competition.

Ramirez is in the process of applying and auditioning to be a Jazz Studies major at Berklee College of Music, University of North Texas, University of Texas, Texas State University, and Texas A&M University-Kingsville.