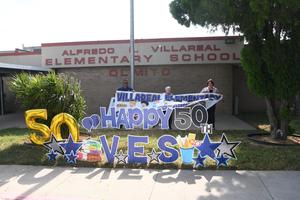 Fifty years ago, Los Fresnos CISD evolved from Los Fresnos ISD and Olmito ISD dissolved.
A small group of people, all wearing masks, came together separately to mark the 50th Anniversary of Los Fresnos CISD at Villareal Elementary School.
VES, located in Olmito, was formerly known as Olmito Elementary School from 1928 to 1981. In 1970, voters in both districts passed separate resolutions supporting the consolidation, which was then approved by the Cameron County Commissioners' Court. The consolidation became effective Sept. 1, 1970.
"This is the day the Los Fresnos added the "C" in CISD," Superintendent Gonzalo Salazar said. "There is a long history at this school supporting the community of Olmito."
The school was renamed from Olmito Elementary to Alfredo L. Villareal Elementary School after a group of Olmito residents petitioned the Los Fresnos CISD Board to rename the school in 1981. Villareal, who served as principal from 1966 to 1979, died in 1980.
VES staff showed off a banner that will put along the fence in front of the school. A colorful yard sign and oversized balloons were also placed in front of the flagpole in front of the school for the ceremony.
For photos of the event, click on the Flickr link here.
Print