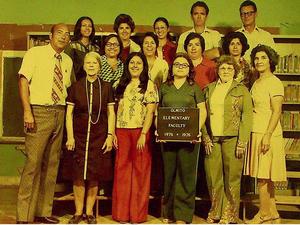 It's been exactly 50 years since Olmito ISD dissolved and Los Fresnos CISD was born.
Fifty years, the Olmito Independent School District was Cameron County School District No. 9 with its own school board and elementary school – Olmito Elementary.
Olmito ISD's history dated back to 1928 when an $8,000 bond issue was approved to build a three-room school.
But in 1970, voters in both the Olmito ISD and Los Fresnos ISD voted to consolidate the two school districts, and the Cameron County Commissioners Court approved the results of the election.
Thus, on Sept. 1, 1970, Los Fresnos Consolidated Independent School District was born.
The 50th anniversary has brought back many memories to the residents of the unincorporated community of Olmito. The school has been the focal point of the area just east of Interstate 69E.
Alfredo L. Villareal started working at the school as a teacher in 1955.  He became principal in 1966 and led the transition of the school into the consolidation. He remained principal until he moved to Las Yescas Elementary in 1979. Villareal died on Easter Sunday in 1980. One year later, Olmito residents petitioned the Los Fresnos CISD Board of Trustees to re-name the school in his honor. The motion passed and Olmito Elementary became Alfredo L. Villareal Elementary.
Olmito Elementary had several staff members who were part of the 1970 transition team who are still active in the area. Two of them – Los Fresnos CISD staff members Janie Cortez and Minerva Hernandez – are still employed with the school district. Both attended the school as children and have completed 50 years with the district and are still working.
Hernandez worked 22 years at Villareal as Kindergarten instructional aide, Title I Reading Lab instructional aides and librarian.  She has worked at the District Service Center for 28 years in two stints as Secretary to the Federal Programs (Grants Administration) Office and as the secretary in the Guidance and Counseling Office.
Cortez has worked her entire 50-year career at Villareal Elementary in nine positions as receptionist/secretary, registrar, records clerk, bookkeeper, nurse aide, printing clerk, cafeteria helper, textbook custodian helper, and P.E. aide. She has worked for the nine principals who have led the school since the consolidation.
After Villareal, Joe Ceballos had the longest tenure as principal for 13 years. He later became the Director of Federal Programs of Los Fresnos CISD before retirement. Former principals Bertha Zamora and Antoinette Connaughton have retired but remain active in education.
Wanda Treviño, who served in several positions at the school before retirement, has also remained active. She still has her copy of 1952 yearbook The Elm Tree. The Spanish translation for elm tree is "olmo." A small elm tree is an "olmito."
Olmito Elementary 1975 Staff Photo
(Bottom row, left to right) Alfredo Villareal, principal; Amelia Fernandez, Minerva (Cortez) Hernandez, Belia Garcia, Margueritte Davidson, Leonor Lozano
(Middle row) Nina Cortez, Irma Ruiz, Wanda Treviño, Amparo Cavazos
(Top row) Janie Cortez, Amelia de la Garza, Estella Cortez, Jerry O'Shea, Everett Easterly
Print