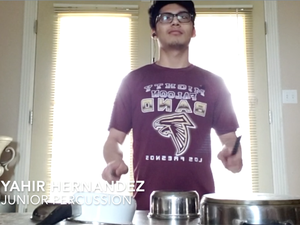 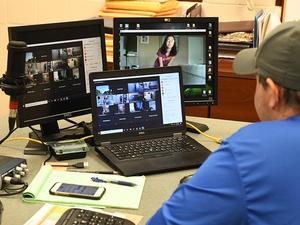 Los Fresnos High School drum majors and section leaders have played an expanded role in preparing the band for the new school year.
It's been a summer like no other for the Los Fresnos High School Band.
On-campus learning was suspended in March, leaving the Class of 2020 seniors without a closure for the school year like all other students.
"I don't think anybody realized how much of an impact this pandemic would have on bands everywhere," Director of Music Andy Salois said. "And it's changed everything. We haven't practiced together, we haven't had marching practice, and we don't know if we will even play during football season. But if it's any consolation, all bands are going through the same thing we are."
Salois and his assistant directors are using Google Classroom for instrumental and marching drills, so that students can be accustomed to the platform that will be used for their other classes that begin Sept. 8.
Three students – Abdiel Araguz, Faith Garza, and Benjamin Ramirez – have been named drum majors. If they do perform at football games, they will be the students on the platforms leading the band. There are 26 section leaders to lead the small groups of students in the 185-member band.
From his office, Salois directed a small group through marching exercises. He called on students individually to show how others the proper technique.
Before the end of the school year, assistant director David LaClair arranged 39 members of the Falcon Band to play the LFHS Fight Song. To view the video click this link.
Print